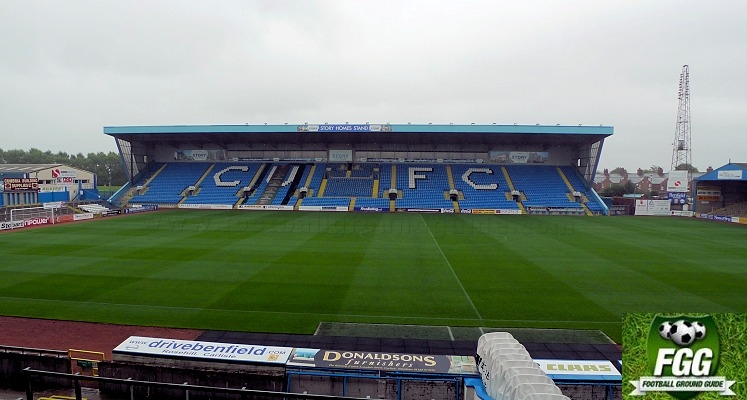 The wonderful Settle to Carlisle railway took me to the top left hand corner of England a few months back.

This time it’s the magic of the FA Cup.  Carlisle United of League Two taking on Oldham Athletic in the first round.

This stage of the competition has always seemed a million miles away from Wembley. But with Tottenham playing home games at the national stadium there might be an opportunity, given two wins, for a lower league or even non league team to get to Wembley in the FA Cup without getting to semi final or final.

Its a competition I love.  I’ve seen Oldham beat Man City, Everton and Liverpool over the years and in a previous life saw Stockport knock out then top flight QPR.  I tend to like the underdog.  It can be hard work at times but great moments of joy every few years seem to make it worthwhile.

Although our match tickets are remarkably cheap, the away fans will sit on the left end of the stand in the photo.  That’s an area that’s not even level with the pitch!  Apparently many years ago there was a plan to move the pitch a few yards to the left.  One assumes the money never materialised and away supporters are left with a crick in the neck when they twist to watch the action 120 yards away at the other end of the pitch.

My friend John is driving.  Our lads will be in the back of the car.  And I’ll get a decent view of Cumbria’s magnificent scenery as we get further north on the M6.

Fingers crossed we’ll come home with yet another entertaining win.  And Benin the second round.

One thought on “Cumbria Tomorrow”