Songs For a Funeral 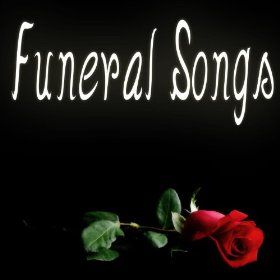 I don’t fear dying.  It is, after all, an inevitability of living.  I worry about how my kids will cope without me.  Even though they cope without me anyway!  And the irritant of pain is something that will annoy the hell out of me.  But the concept of not being here anymore really doesn’t bother me, other than the upset and inconvenience it will cause others.

I should have prebooked my funeral, but haven’t.  I noticed a 10% Coop discount on my bank account today and wondered if it was valid for a funeral.  Apparently not.  Maybe I’ll sort things out when the redundancy cheque lands.

If not, keep it cheap and simple folks!

Which raises the question of music.  What do I want playing at my funeral?  At this stage I don’t know.  At least I don’t need to decide just yet.

Dearest Tricia left us with Frank Sinatra’s My Way.  My uncle had a rather indulgently long Snowy White track played that went on a little too long before finishing with Chris Rea’s Gone Fishing – wanting the congregation to feel that he’d like them to feel that’s where he is.

That triggered a Chris Rea September Blue thought in my mind.  One of the saddest songs ever.  Too sad I think.  Even if I’m cremated in September!  And The Road to Hell isnt really appropriate for a cynical agnostic.

Current thinking is a little more uptempo.  A bit of ELO singing All Over The World at an event where people might cry might be good to lift the mood in that bit before everybody gets outside and breathes a “thank f*** that’s over and done with” into the air while wondering which distant relative or unknown friend to talk to.

That might reflect the travelling I crammed in between diagnosis and departure.  Even if the lyric “there’s going to be a party …” doesn’t quite reflect who I am.

Although the CD will probably jump and skip horrendously bringing giggles to the faces of the mourning.  I think I’d quite like that!

One thought on “Songs For a Funeral”