Countdown to the Northern Lights 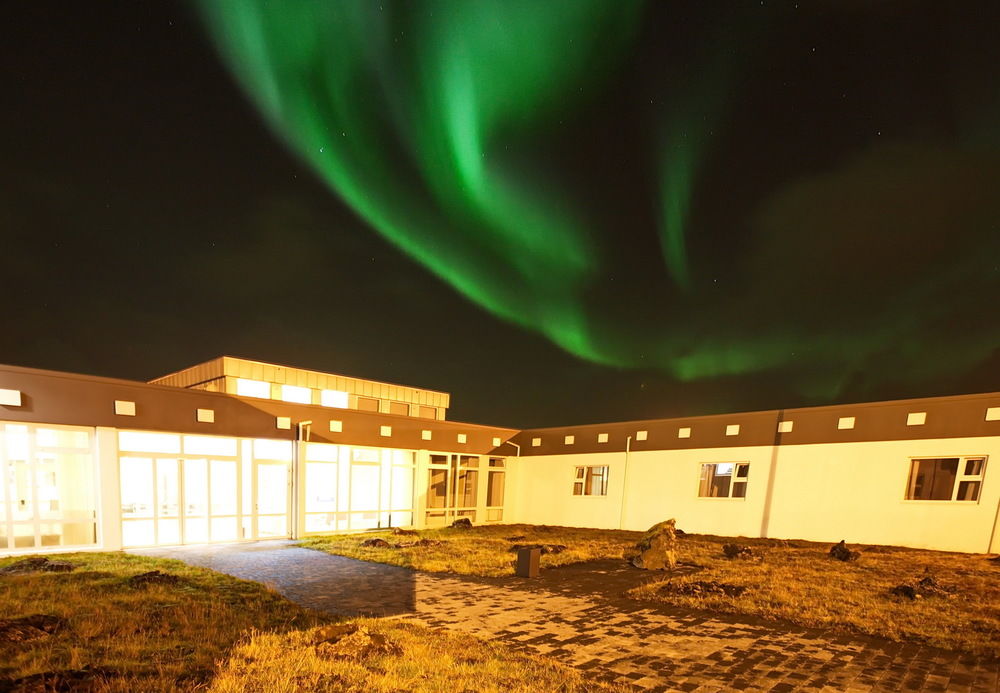 The hotel picture shows the lights in all their glory.  It’d be nice to think that was some sort of guarantee.  The current aurora forecast isn’t that promising.  It’s a good job my reason for visiting Iceland is more about the geo-thermal.  The lights are a possible bonus.

Yesterday I took time to check the Trip Advisor reviews of the hotel.  It scores highly, which is reassuring as like everything in Iceland it isn’t cheap.  The stay is away from the lights of Reykjavik because I want minimal light pollution and also found similar quality accommodation to be more expensive in the capital.  I did try my sneaky “what’s the current price” trick where I have been known to cancel and rebook for less in the past.  No such joy here though – the hotel is sold out on all four sites I checked!

One negative review I’ve read commented on the free continental breakfast being disappointing due to no hot items.  While I’m a big fan of dead pig to start my day in a hotel it strikes me as a little harsh to criticise a continental breakfast for lacking in meat and fried eggs.  Although I suppose the hotel sits on the North American tectonic plate so I should really expect pancakes and waffles!  Given food prices in the country I might consider getting a man bag to subtly secrete multiple croissant into for consumption later in the day!

One nice feature of the place that I hadn’t picked up on when booking is free tea and coffee 24/7 in the lobby.  I’ve packed a flask that will be ideal for filling up with this!

I think my packing is complete.  Although I am waiting for a £3.50 pair of long johns to be delivered by Amazon.  Temperatures are forecast to be between minus two Celsius and three Celsius.  As an Oldham Athletic season ticket holder I’m pretty confident I’m hardy enough to survive this even without the planned delivery.

It’s a car hire trip this one.  Winter tyres are included.  Whereas my last car in Malta came in at £16, and I’ve just had 953 Avios credited for that, this one is nearer £300 for five days and will only earn 760 Avios.  Go figure.  But given the locals desire to charge silly money for trips I can do myself, it’s pretty reasonable value by comparison.

Flights are with Icelandair.  The alternative of Easyjet doesn’t include hold luggage and, regardless, was coming in at three times the price of the country’s national carrier.  A no brainer.  It’s a paid for food service on board so I think my newly obtained airport lounge pass will come in handy pre-flight in Manchester.  Alas, those pesky Icelandic chaps won’t let me utilise it on the way home.  So filling up with hotel croissants is the order of the early morning pre-departure.

Icelandair did email me an exciting new concept the other day.  “Bid for an upgrade”.  This rather appeals to my sense of snobbery.  I quickly checked what was included.  More leg room – great.  Lounge access – well I’ve already got that now.  Priority boarding – nice to have but it doesn’t really justify paying money for.  So I thought I’d attempt a low bid of £20.  I clicked through to discover a default price off £255 each leg and a slide with a minimum bid of … £120.  While I like the sense of fun and anticipation in this concept they can sod off.  I like posh flying but business class to Iceland is very different to long haul business class.  And tripling the cost of the flights just isn’t worth it for this trip.

I think I’ve covered everything off.  CT scan tomorrow followed by a trip south to Northampton.  Not quite as exciting as doing something from the bucket list.  Hopefully both will end in a win for me.

My Cancer and The God Question

One thought on “Countdown to the Northern Lights”